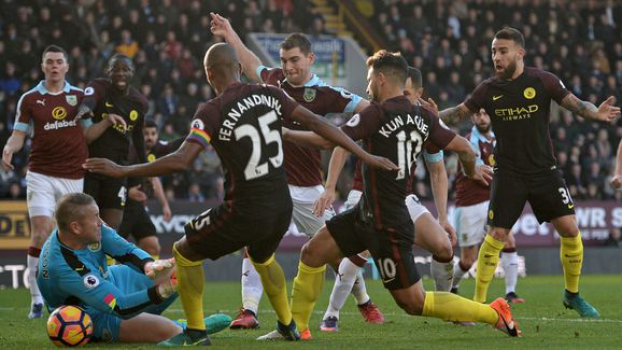 ​Manchester City ascended to the top spot of the Premier League

Manchester City did not enjoy a comfortable afternoon in Burnley, but it certainly proved a productive one. A third consecutive win on the road pushed Pep Guardiola's side back to the top of the table, for a short time at least, but City had to come back from a goal down against a spirited and physical Burnley team. If their home form matched their away form, their stay at the top would not be so short lived. With no matches to come this midweek, Guardiola took the opportunity to offer an extended rest to some of his key players ahead of next weekend's clash with Chelsea. John Stones, David Silva, Ilkay Gundogan and Kevin De Bruyne were all left out of the XI, though De Bruyne made a cameo appearance towards the end. Aguero, who passed a late fitness before kickoff, was deemed indispensable. And what a wise decision that turned out to be. Guardiola, the man of many shapes, opted for a 4-2-3-1, perhaps hoping that the mobility of Fernandinho and Fernando would give Yaya Toure the freedom to roam, unhindered by defensive responsibility. But there was no room for anyone to roam with Burnley's back line pushed up so high. City dominated possession in the first half, but looked distinctly out of sorts and found it hard to create opportunities of note. On the odd occasion that they did, they found 37-year-old goalkeeper Paul Robinson (called up to replace Tom Heaton for his first Premier League appearance in five years) in vintage form between the sticks

Massive win for the Hurricanes, who notch their first victory of #WBBL07.

Nth Melbourne: Jy Simpkin has signed a contract extension with the Kangaroos, he is now contracted until the end of… twitter.com/i/web/status/1…