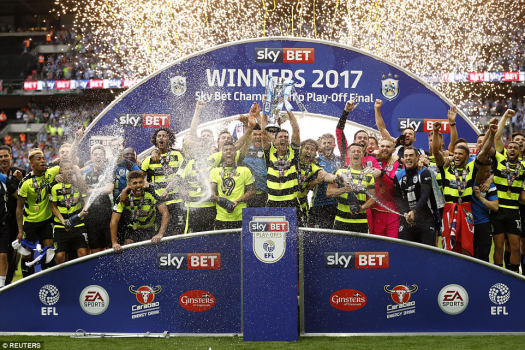 Unbelievable: after 45 years Huddersfield is back in the Premier League

After 45 years of waiting the team of Huddersfield managed to win a promotion for the Premier League. The finished 5th in the Championship but in the final playoffs they beat teams like Sheffield Wednesday and Reading (with penalties) to guarantee their first participation in the new format of the Premier League and their first in the biggest and most recognized tier in the English football from 45 years.

In a boring game which finished 0-0 in the regular time and then 0-0 in the extra time, both teams went to decide everything from the penalty shootout. Just like against Sheffield Wednesday, Huddersfield managed to win after penalties as they were more successful from the white point. 4-3 after penalties guaranteed them the final third spot for the Premier League. Now with this amazing win last night they won around £170M just by participating in the elite. Of course, lots more money will be given to them from sponsorship rights and any other clauses or promoting so we can say that the Terriers as the club is known found the gold mine. In addition, if they managed to stay in the Premier League for another season they will get £300M more money.

David Wagner, the head coach of Huddersfield did incredibly well tactical game as he knew completely how to win such a game. He is a good coach with incredible tactical knowledge and amazing understanding of the game. No doubt, he is highly valued and recognized coach since his arrival here. It looked like that both teams are tired from the long season and their first playoff games so they decided to play the game like they did not want to lose it. After the bore draw, the penalties looked really the most interesting and deserving ending to this "priceless" game.

During the game and especially in the penalties, Danny Ward become the hero of the Terriers and man of the match by saving one penalty with amazing reflexes. He saved some dangerous goal situations and he definitely turned into the best player on the pitch. We are sure that he will be a vital player next season for the team, fighting against the best clubs in the world.

After all, we are not that satisfied as we gave you last day a prediction that Huddersfield are going to win this game. They managed to win it but after penalties and we are very sorry for not predicting it like that. But we are sure that Huddersfield satisfied you at least from the penalties after the boring 120 minutes. All the time, such late drama is very welcomed and amazing for the neutral fans.