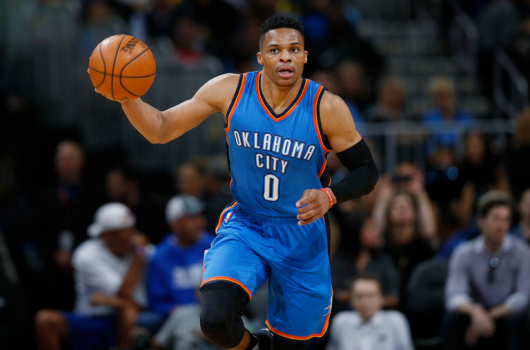 Russell Westbrook Ties The Record – One Step From History

Russell Westbrook tied Oscar Robertson's record with most triple-doubles during a single season in the NBA. And he did it against the team where legendary ''Big O'' used to play from 1970 to 1974.

Once again a fantastic achievement by the Oklahoma City Thunder guard. This Tuesday night he finished the game against the Bucks, with 12 points and 13 rebounds and assists apiece. And he played only 27 minutes of the game.

“I just play, man, honestly. It definitely wasn’t a goal, just going out and trying to win,” Westbrook told reporters after the game. “Leadership to me was more important than averaging points or field goal percentage or whatever, because I think that’s what gets us the farthest and helps us win a championship.”

At this point, Westbrook still has a triple double average in each game, with 31.9 points 10.6 rebounds and 10.4 assists he is dominating the courts around NBA. Also, this has been his 7th consecutive triple-double, which is now the second longest streak in NBA history. And he still has a chance to extend this fantastic row. At the first place is Wilt Chamberlain.

He had nine in a row from March 8th to 20th back in 1968, when he was playing with the Sixers. Michael Jordan also had seven in the stretch in '88-89. Russell Westbrook has a chance to eclipse all that.

He currently has 78 career triple-doubles and he is tied for the 4th place on the All-Time list. Oklahoma City Thunder has been a one-man-show team, because, without Westbrook, we are 100 percent sure that this team would be somewhere in the bottom of the Western Conference. Without any doubts, Russ is the leader of the team because he started in all 76 games this season and he is averaging 34.8 minutes per game, and every time when decisive plays are made, he is the key player.

Currently, there is a huge debate who will win the MVP Award for this season. And if there is any justice, anything besides him would be unfair.

Why? Because Westbrook is the most dominant player in the NBA. Even the Milwaukee Bucks head coach, Jason kid who was also known in his career for putting down triple double figures often, said that there is no other possible solution for the MVP award than Russell Westbrook.

In fact, she said that Westbrook would be cheated if he does not receive the MVP award.

“I think he would be cheated — or short-changed,” Kidd told regarding the possibility of Westbrook not getting MVP. “I think he’s got to be part of that equation.

“What he’s done is history. There’s only one other guy who’s done it — Oscar (Robertson). It’s been a long time since that’s happened, so he’s gotta be right there when it comes down to giving that award out.”