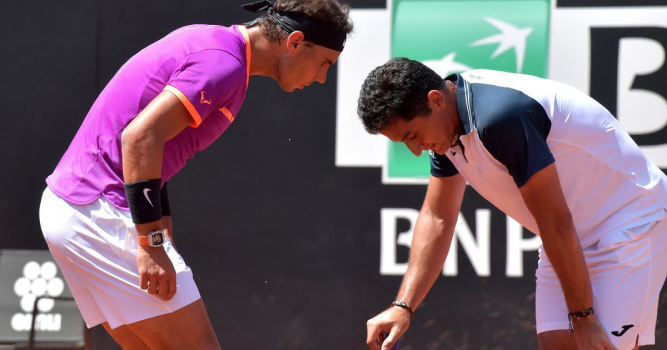 Nadal is very closer to the World Number 1 spot

Rafael Nadal is already in the third round of the ATP Masters in Rome, where his ambitions are to win the title. From the beginning of the year, he is playing amazingly well and he is contender number one for claiming the world tennis top. Of course, he is using the fact that Djokovic and Murray are not feeling well and comfortable in the past few months, while Federer is playing one tournament per month as he will even miss the whole season on clay this year, which is even boosting Nadal chances.

Now let's go to the picture of the world rankings at the moment. Andy Murray is first with 10 360 points, while Novak Djokovic is second with 6845. On the third position is Stan Wawrinka with 5605 and on the fourth position is coming Rafael Nadal with 5195. At first sight you can see that Murray is a big leader and no one can pass him in the ranking but it is not like that. Murray won the title here in Rome last year and he has to defend another 1200 points from the final on the French Open last season as well. This means that from the next 2 weeks, the world number one is going to lose 2200 points for sure.

He already was eliminated here in Rome in the second round from Fabio Fognini and because of that the first 1000 points will not be defended. Nadal is favorite number one for claiming the title here. He has no points to protect as the last year he did not participate in this campaign. This is a huge advantage for him as with one eventual win he will become eventually world number 3 with around 6000 points. Of course, everything is on theory but with the great style which Nadal is playing right now, he is favorite number one for being number one this year. The only thing, which can stop him from this aim is Andy Murray to make a good Roland Garros and defend at least half of the points he got last year, something which is not very possible if we follow his latest results.

The interesting fact is that, either Djokovic and Murray can miss the final of the French Open. Both players are suffering mentally and currently they cannot concentrate on their games as they are even losing from not that good players. The solid performances is missing and because of that we believe that if Rafael Nadal wins the title here and in the French Open, he will got totally 3000 points (he has just 60 points to defend on Roland Garros). With those 3000 points he will have combined 8000 points which makes him above Murray and Djokovic if they did not defend his points on the French Open.

If someone was telling us that Nadal will be playing such amazing tennis, we will not believe him. But we must admit that the Spaniard is playing fantastic and he totally deserves to be number one at the moment. Maybe only the Swiss Master – Roger Federer is better at some points but with all those missed games and campaigns he does not deserve to be number one. The only fact which can save Murray is to take some cheap points on the next tournaments on grass just after the French Open and hope to defend his title on Wimbledon, something which does not look that sure for him.